I was glad I took the Flåm Railway in the end. The truth be told, I was kind of worried about taking this train ride. I have a thing about trains travelling along mountain cliffs. The sight of the sheer drop makes me scared! The last train ride I took was for the journey from Sydney City to the Blue Mountains. Everyone was obviously oblivious to the DANGERS of which were supposedly so apparent to me.

The Flam Railway train ride is touted to be one of the most scenic train rides in the world and is the 3rd most visited tourist attraction in Norway. However, it is also the steepest standard gauge railway in Europe and travels up 863 metres in the 20km journey. In order for the train to scale this height in such a short distance, there is even this 180degree turn within a mountain, I’m like WHAT THE HELL IS THAT??? But in order for me to visit Flåm, I would have to take this train ride to get back out!

Turns out, I was not scared in the end! I’m quite surprised and the Partner was quite surprised too! So much for making a mountain out of a molehill. I guess I was just too busy snapping picture after picture that I had no time to be scared. Also, it helped that the train was travelling at a pretty slow speed, slow enough to make my brain think that it was safe. The gradient wasn’t apparent to me at all, and even the 180 degree turn would not have been noticed had I not read about it earlier. And also, at the steepest of parts, there were railings for protection. On second thoughts, these railings appear to be made of wood…

So the moral of the story is, in order to enjoy the dramatic scenery, one has to first scale the steep mountain. 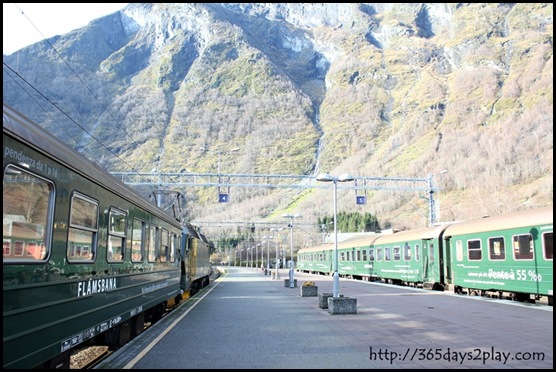 The Flåm station at the start of our journey 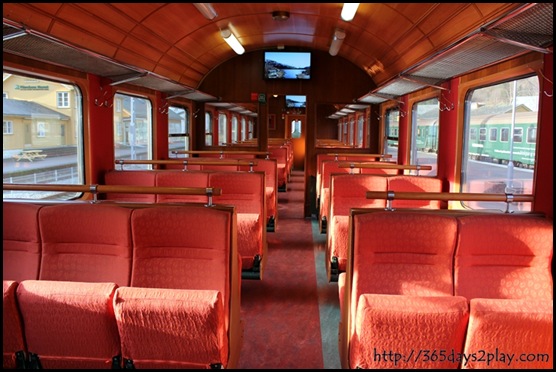 Only 8 passengers in the entire train. The perks of travelling off peak! I had the whole carriage to myself and in fact I was basically moving left or right depending on where the scenery was. 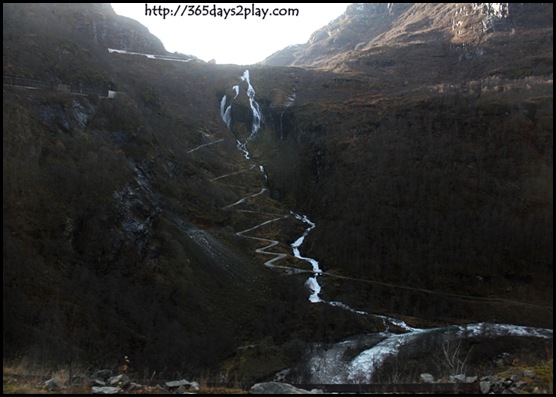 Can’t remember what the name of this road is. It’s a popular cycling route during the summer. The Norwegians love to tell you how many hair-pin turns there are. “Hair-pin” is like their favourite word, and the more there are, the better!

I have to remind you that despite the safety record, a bus once toppled over while travelling on a road with these hair-pin turns enroute to Milford Sound in NZ. I took that bus ride a number of years back (b4 the accident) and it was pretty terrifying for me. See, I’m not making a mountain out of a molehill! 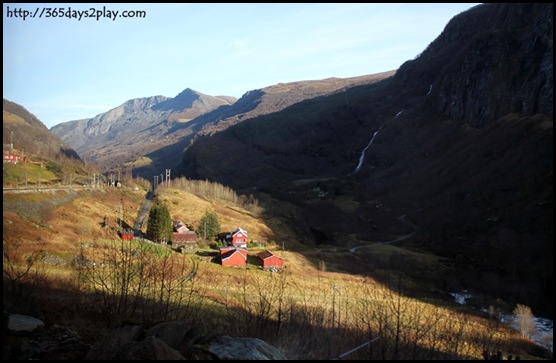 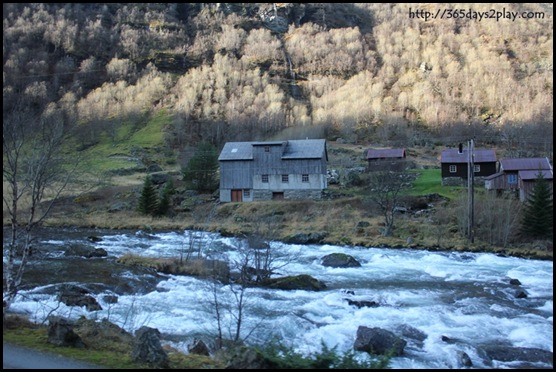 One has to get used to the sounds of the gushing water when living so nearby. 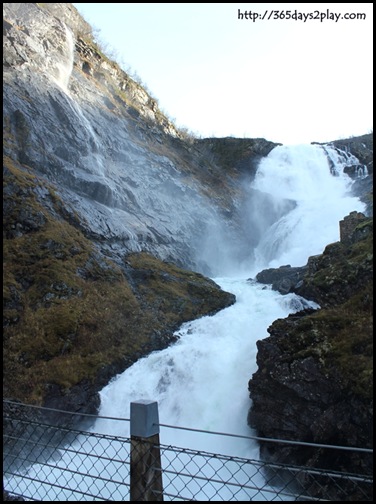 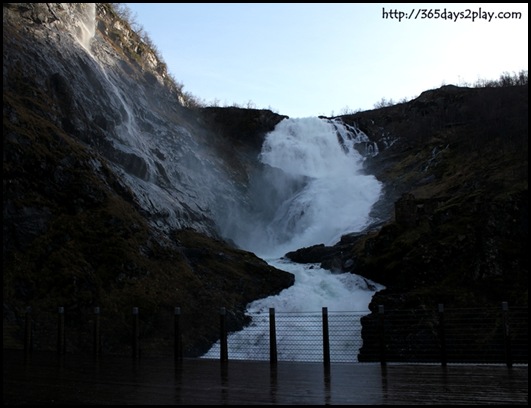 The Flåmsbana actually makes a 5 minute photo stop at the Kjosfossen waterfall! In the summertime, 2 maidens magically appear to serenade the tourists. These photos just don’t do justice to how wonderful the feeling was to be able to view the waterfall up close and to enjoy its misty spray. 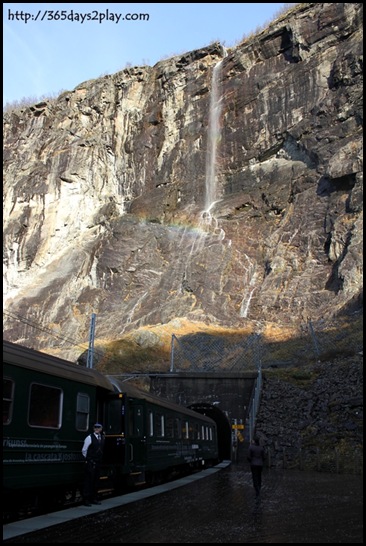 The train and other tourists waiting patiently. The other tourists on the ride weren’t particularly enthusiastic about the waterfall. After a couple of photo shots, they retreated to the warmth of the train carriage. Can you spot the rainbow? Bet they missed it. 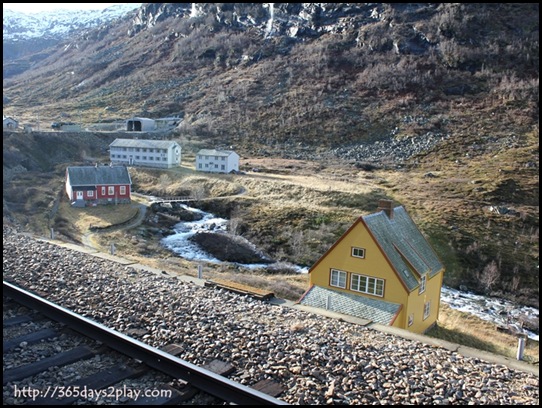 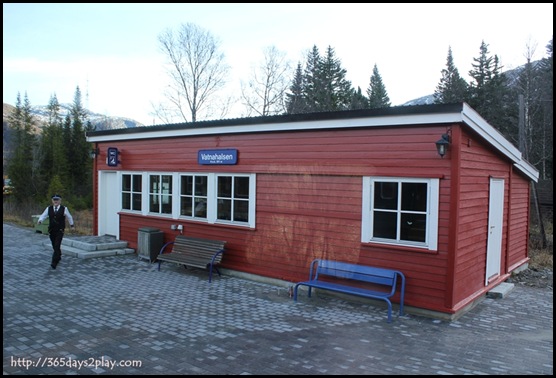 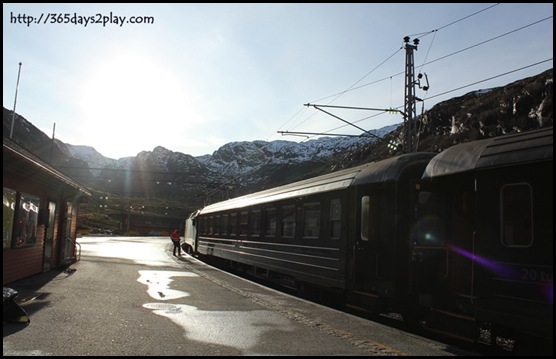 And finally, after 50 minutes, we arrive at the Myrdal Station, 866.8 m above sea level!

One thought on “Flåmsbana (Flåm Railway)”